Designed illustration powered interaction prototype for an app where a user on-board and add his favourite coffee flavours to the cart after making required customisations. Illustrations are done using Sketch and pixels made dance using InVision Studio.

How we can help you ?

Whether you need a website or an enterprise-level solution, we build functional products that people love to use.

Designed the app logo and defined the brand style guide to re-design the 100+ pages website.

Worked on the logo, branding and digital assets for both the website and web-app.

Transformed traditional logo into bold & modern monogram for app use.

We love to connect!

Are you looking for something intuitive and functional?

Start a project
It was a delightful experience. I was looking for someone technically sound with deep knowledge of design systems and android app prototyping. Everything went pretty well and met as per our expectations. I was overwhelmed with the fact, how these people come out with ultra-fast and fierce approaches to fix the obstacles.

Ratnesh Kumar
Sr. Project Manager - Mobikul
Bringing disruption to eCommerce is the midset we have before starting with bagisto, and that is what we got exactly after 1 year. Bagisto is a story of zeal and passion of few people who strived for nothing short of a miracle. For me, bagisto is not just any technological entity, not just a mere job, not just a department, it's an emotion. When I look back at the past 1 year, it seems all we have done is move fast and build things (certainly not to break ;-)) 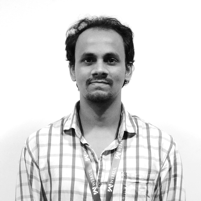 Saurav Pathak
Business Developer - Bagisto
It was a one-stop solution for all my requirements to deliver flawless customer support through diverse horizontal mediums. Also, the best suite for support representatives to streamline and automate support operations to deliver instant support solutions. Must say, it is a gateway to the best approach possible for the helpdesk solutions and this commendable experience helped me to uplift my business.

Our work makes us different.
See more of our previous amazing work.